Personal Bank accounts operated by Kiambu governor Ferdinand Waititu and members of his family are set to be frozen as investigations in his source of wealth continue.

Kiambu County has been on the news following shocking revelations that it spent s 2.1 billion on national government functions.

Governor Ferdinand Waititu has since disowned the details.

The committee is chaired by Homa Bay Senator Moses Kajwang, whose deputy is his Kiambu counterpart Kimani Wamatangi.

It emerged that the county had allocated Sh973.9 million for State House functions but spent Sh902 million.

According to the document, the county also spent Sh793 million on Free Primary Education, which is a national government function under a county vote head which had been allocated Sh804 million.

Some of the prime property owned by Waititu is the Delta building along University Way in the Nairobi CBD purchased at a whooping sh 250 million.

His wife Susan Ndung’u was recently arrested at the location when she had gone to supervise extensions and improvements being made to the seven-floor building. 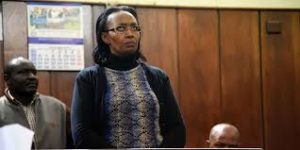 Susan was later charged in the Nairobi City Magistrate’s Court with occupying a building without an occupation certificate, contravening the City Physical Planning Act.

He has frequently faced graft claims with irked voters in Kiambu accusing him of raiding County coffers and using the proceeds to enrich himself.