Over 600 residents of Naisoya in Narok North subcounty are concerned that the government’s promise to issue them with title deeds within a 60-day period will not be attainable as it is surrounded by mystery.
Residents claim that outsiders have invaded the process and monitoring and thorough vetting must be done.
During a recent public baraza at Naisoya health centre, Narok county commissioner George Natembeya said that the government’s bid to end the longstanding dispute among members of the community that had derailed the process of land adjudication in the area is going to bear fruit this time round. 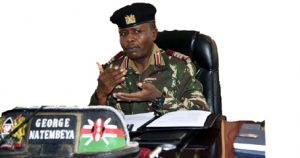 Wrangles over land started in 1990 when the Ntutu-led commission put boundaries of the forest land, hence evicting people who had settled in 5, 700 hectares of forest land.
The move saw a section of residents disputing the decision and filing a case in court demanding for compensation.
The petition was dismissed hence paving way for the land officials to adjudicate the remaining 7,500 hectares that they owned legally.
The land that sits adjacent to Maasai Mau forest and is less than 30 kilometres from Narok town is one of the major food baskets of the county as wheat, maize, beans and potatoes do well in the area.
Narok county adjudication officer Amos Musyoka said his office is finding it difficult to verify names in the register before the title deeds are processed.
Last year, the government evicted about 7, 200 people from Kosia part of Maasai Mau forest reclaiming 4,500 hectares of forest land