A family in Rongo has appealed to the government to intervene and have it get its land back.
The land was allegedly grabbed by Governor Okoth Obado in 2014 and hurriedly erected a fence before laying a foundation for commercial purposes, causing panic among family members who could not stop the construction of a hotel as complaints were ignored by officials at the county government.
An 80-year-old widow had her house pulled down by goons hired to scare family members forcing some to relocate to other areas fearing for their lives as the hoodlums were rampaging, reportedly instructed to discipline family members. 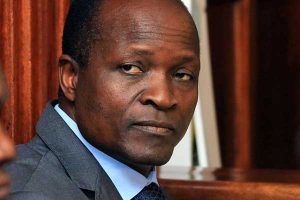 Jane Agola Omwono is desperately crying for justice arguing that some of her grandchildren who had sought court action to have the matter sorted out complained that the first person to encroach on that piece of land was a close relative of the governor.
He later transferred ownership in the name of Governor Obado who upon realising the matter was in court reportedly sold it to another person from Homa-Bay county, thus raising suspicion among villagers who are now demanding to be told if the law favours certain individuals as an attempt to petition relevant arms of the government has always been thwarted.
The family urgently applied restraining orders to have construction going on the disputed plot stopped until the matter is heard and determined by court.
The lawyer representing the family engaged by Fida is reportedly said to be doing too little to have the case heard and a ruling made to save the family from further frustrations by cronies of the governor and Sang’wenya group frequently spotted within the disputed plot.
The family also expects the court to stop forthwith constructions and subdivision on the said land until the matter is determined by the court.
Some family members alleged being warned by cronies of the governor and want the security personnel to accord them protection and monitor movement of the governor’s cronies and bar them from accessing the surrounding.