This follows a row over a burial site between former assistant minister Arch Bishop Stephen Ondiek’s family and another one in Ugenya, Siaya County.

The row took a dramatic turn after Ms Beatrice Otierno’s kin interred her remains in the former Ugenya MP’s home on Monday night.

The deceased family stated that their daughter was married to one of the late Ondiek’s sons, Solomon Ondiek who lives in the United States.

But widow of the late Bishop Ondiek, Mrs. Concilia Ondiek has vowed she will move to court to have the body exhumed claiming the deceased was not a member of the family since she had been married to another man in the same village. 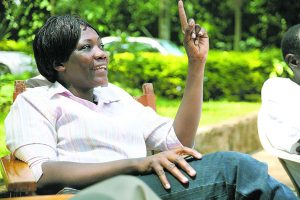 According to witnesses, a convoy of three vehicles snaked its way into the village shortly after 10pm and went straight into a Legio Maria sect church compound that was adjacent to the late minister’s rural home where the deceased’s brother, Wycliffe Otieno and mother, Grace Achieng Otieno  were joined by a handful of mourners who lowered the casket.

Villagers only came to learn of the strange burial the following morning when a hurriedly convened funeral service was held at the politician’s home where free food and drinks were served to anybody willing to partake.

Through her lawyers, Ombiro Ogachi advocates, Mrs. Ondiek urged the court to bar the deceased’s mother and brother or their agents from interring her remains at her land situated at Siginga village in West Ugenya as she was not a family member.

She told Siaya Principal Magistrate Mr. James Ong’ondo that the deceased was married to one Richard Kobare who was still alive and that the marriage was blessed with two children, both boys aged 18 and 16 years respectively.

The principal magistrate, Mr. Ong’ondo had barred the defendants from burying the deceased at any place or date that has not been approved by the complainant until the matter will be heard and determined.

Ong’ondo further ordered the Officer Commanding Ukwala police station to enforce the order and ordered that the matter be heard on 11/6/2019.

But in a turn of events, the defendants obtained an order from the same magistrate on Monday staying his previous injunction and ordering the management of Same Day Classmate Private Mortuary to release the remains of the deceased for burial.