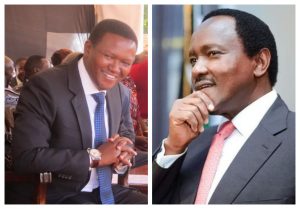 Machakos governor and Maendeleo Chap Chap party leader Alfred Mutua and Wiper leader Kalonzo Musyoka are busy plotting their survival in the political arena after 2022 general elections.
This is evidenced by the fact that both have thrown weight behind the push to have a referendum next year. In their scheme for political survival, both are pushing for the expansion of the executive to create more political seats in order for them to be accommodated after their realisation that their presidential bid will not bear fruits.
Governor Mutua whose term as the county boss comes to an end this term is worried that with the current constitution, he may not survive politically after losing in the presidential race the same with Kalonzo, who has remained in the political cold since 2013 elections.
Both who are fighting for the control Kamba votes are said to be aware that already, the national politics is pitting William Ruto and Nasa leader Raila Odinga who are considered frontrunners and hence their chances remain minimal.
Governor Mutua who presented his party petition to the building bridges initiative recently rooted for an expanded executive which he feels will offer him a soft landing after finishing his term.
In the memorandum, Mutua wants the creation prime ministers position with two deputies and creation of a powerful post to be occupied by the leader of opposition. He also roots for the top slots to be shared amongst various communities to address inclusion.
The governor also wants the top leaders vying for those seats to be allowed to either contest senate or MPs seats. The decision by Mutua to back a bloated executive is influenced by his desire to occupy one of the slots in power sharing formula.
As part of his exit strategy Mutua is said to have set his eyes on Mwala parliamentary seat currently held by Vincent Musyoka. Musyoka was elected on Mutua’s Maendeleo Chap Chap party riding on the governor’s popularity in the constituency. The governor hails from Mwala.
In his schemes the governor wants to to first secure a political seat then later use his party to cut deals with big parties. Mutua has hinted to his close allies that he is out to split Kamba votes as a way of neutralising Kalonzo grip in the region and hence the need for him to play national politics by contesting the presidency. His close advisers say it is easier for him to tackle Kalonzo by using the same trick both Ngilu and Kalonzo used on Kambas as they sought to galvanise their votes.
In 1997 general elections, Ngilu consolidated Kamba votes by going for the top seat even when the region had remained fully behind Kanu for decades. Ngilu who was second from the region to go for presidency after John Harun Mwau in 1992 multiparty elections sealed Kanu’s fate in Ukambani and became the political kingpin until 2007 elections when Kalonzo employed the same trick.
By contesting for the presidency, Kalonzo grabbed the community from Ngilu and has remained at the helm till today. Mutua now plans to use the same strategy against Kalonzo whom he accuses of letting down the community. In his plot the governor has courted both Makueni governor Kivutha Kibwana and Ngilu of Kitui who have fallen out with Kalonzo lately. Kalonzo’s decision to back referendum is also said to be influenced by his desire to remain the Kamba kingpin and would like to use the campaigns to stab his authority and tame Mutua. The Wiper leader is also aware that once the executive is expanded, he will get a slot that will help him remain relevant at the national stage.
His decision to endorse the handshake has left him in political limbo with his support base expressing reservations. Wiper supporters cry foul that the party and by extension Kambas got nothing following his decision to work with Uhuru Kenyatta.
To many there is Kamba face in Uhuru government courtesy of Kalonzo and that the handshake was a personal tool for both Kalonzo and Raila. To them the appointments Kalonzo got and rewarded his few cronies are insignificant compared to what Raila got considering that Kambas voted more for Raila than his own tribe. Kalonzo is said to be considering contesting for an MP seat in Mwingi.
After the 2017 elections there was effort to force the Mwingi North MP Paul Nzengu to step down for Kalonzo to take up the parliamentary seat but the MP remained defiant forcing Kalonzo to abandon the idea.
Last week during a church service at Kasina AIC in Mavoko constituency, the Wiper party leader rooted for a referendum and urged Kambas to support the idea but that was translated as an attempt to support creations of more posts for him to benefit. The church service was also attended by Peter Kenneth who urged the community to work with him towards 2022 promising to have talks with Kalonzo for a pact