Kakamega deputy governor Philip Kutima is starring in a Sh21 million unsurrendered imprest controversy while playing two county officials against each other.
The two county ministry of health officials are chief officer Everline Mulunji and accounting boss Beatrice Etemesi who have been set against each other in the drama.
Three letters show that Mulunji, the DG’s villagemate in Malava illegally approved the expenditure of the imprest in total contravention of rules and ignored due process as the law demands. 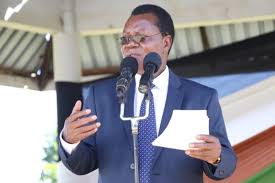 Legally, it is Etemesi the accounting officer in the health ministry who is supposed to certify any expenditure but in this case,
she was by-passed.
A letter dated April 20 2018 signed by Rose Muhanda said to be the GBV coordinator is requesting for Sh9.4 million “towards transforming health systems for universal coverage activities” from the director of health services in Kakamega.
The same was approved three days later by Mulunji for release of the money.
Interestingly, on the same date, Michael Kipkoech, the health records and information officer wrote to the director health services seeking release of a further Sh6.3 million for the same purposes for which Muhanda’s letter had requested.
Earlier that year on February 22, Ralpher Mwenesi, the county reproductive health coordinator had mailed the director of health requesting for the release of Sh5.2 million and this brings to a total of Sh21 million still being held by the ministry
staff.
An insider told Weekly Citizen that at a stormy meeting called by Kutima last week to try and resolve the anomaly, Etemesi refused to bow to pressure by the DG to sign for the clearance of the overdue monies.
The meeting, according to our source, was skipped by Mulunji as Kutima demanded to entangle Etemesi in the illegality in a
clear move seen as the DG shielding his village mate in an impending backlash over the monies.
Etemesi is said to have stood her ground, demanding that the officer who approved the imprest, properly explains in writing
the motive and the same to be filled. This is said to have infuriated Kutima so much and he stood up almost losing his temper.
It took the intervention of an aide at the DG’s office where the meeting was being held to calm Kutima who was stamping his feet towards Etemesi.
From the Kakamega county list of outstanding imprest of quarter ending June 2018, eight individuals are yet to surrender the money 11 months later.
Those still holding the money include Ralpher Okutoyi, Sh5.2 million, Sylvester Omurono Sh1.7 million, David Musafiri,
Sh2.2 million, Lucy Muthsami Sh2.3 million, Michael Kipkoech Sh2.3 million, Protus Wamalwa Sh
2.4million, Titus Ingosi Sh 2.2 million Rose Muhanda Sh2.4 million. All the amounts were due at the end of June last year.
It is interesting how Governor Wycliffe Oparanya will react to the millions of  shillings still held putting in
mind that he mandated his deputy to strictly supervise and surrender of the imprest which should legally be held for only seven days and the DG, today, is juggling between protecting an illegality and performing his duty.
It is claimed the DG is in a panic and could resort to falsifying documents and backdating them in a futile bid to normalise operations.
With the soap opera starring Kutima continuing, worry has gripped individuals who pocketed the millions in imprest as they are afraid non remittance of the monies could attract audit questions sooner or later.