On 20, May, 2019 Monday 5.00 AM 8 passengers traveling by low-cost airline 540 flight to Eldoret start arriving at the Jomo Kenyatta International Airport (JKIA) to confirm their bookings.

The process goes on up to 6am. At the same time the management starts calling for passengers to Kisumu to board.

Consequently they board and take off. 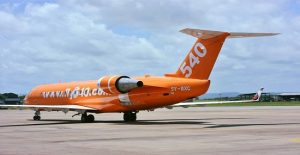 The management then calls for Malindi passengers. They board and take off.

Then comes moment for passengers to Eldoret. They are called to board.

The fight takes off despite the anomalies.

Unlike in normal circumstances air hostess are seen going to the cockpit with no alert messages to the passengers to fasten their belts.

Then the worst comes, they find themselves being told they are landing. Some believe they are in Eldoret airport only to discover they were in Naivasha when they saw Lake Naivasha.

To their surprise they crash land at the JKIA airport in Nairobi.

What are they told? The flight had developed mechanic problem and needed 30 minutes for engineers to address the matter.

Number of passengers decided to cancel their trips.

Late last year close to 50 passengers on board a Fly540 plane escaped death narrowly after one wheel of the plane they were boarding came off during touch down at Eldoret International Airport.

The operators of the Dash -8 300 plane and the airport authorities kept mum about the accident, despite having received several complaints on the Fly 540 planes, which are prone to accidents.