Ciara shuts criticism of her role as gay wedding officiant

Ciara was not accepting anything but positivity about her cameo in Taylor Swift‘s latest video, released Monday.

In the video, the 33-year-old is seen officiating the wedding of Jesse Tyler Ferguson and his husband Justin Mikita.

She was quick to shut down a user, on Instagram, who took issue with her officiating a same-se3 wedding in the video. 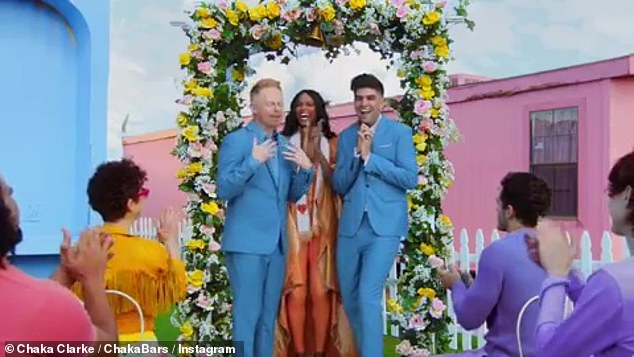 The Beauty Marks singer stunned in a plunging orange jumpsuit for her officiant cameo. She took to Instagram Monday to share snaps from filming.

The comment said: ‘Ciara. You shouldn’t be doing this. We respect u too much. Being at a gay wedding is one thing and joining them together is even more a greater sin. We love you but this is wrong.’ (sic) 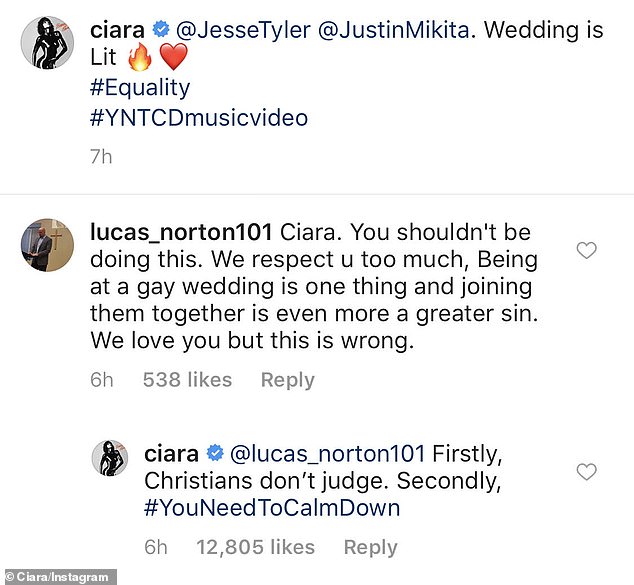 With the song taking aim at LGBT discrimination and bully at large, she perfectly used the song title in her clap back.

The newest single, released Thursday, by Taylor Swift is already being discussed as a gay-pride anthem with her video and lyrics making it clear she aligns herself with LGBT causes.

The song, released during Pride month is said to be the singer’s most political yet.

You Need to Calm Down’s lyrics take aim at haters and bullying alike. With a few lines directly speaking against LGBT discrimination.

‘Sunshine on the street at the parade/But you would rather be in the dark ages/Makin’ that sign must’ve taken all night,’ she continues, likely referring to protesters with their elaborate signs.

Perhaps the most intriguing lyric is at the end of the second verse, when she sings, ‘And control your urges to scream about all the people you hate/’Cause shade never made anybody less gay.’

Earlier this month it was announced that Taylor made a ‘generous’ donation to GLAAD, which focuses on LGBT representation in media. The organization responded on Twitter after the song was released, sharing screenshots of her lyrics shouting them out.