After arrest of controversial blogger Robert Alai, the Anti-terror Police Unit (ATPU) has said he will be charged with disclosure of information in relation to terrorist activities. 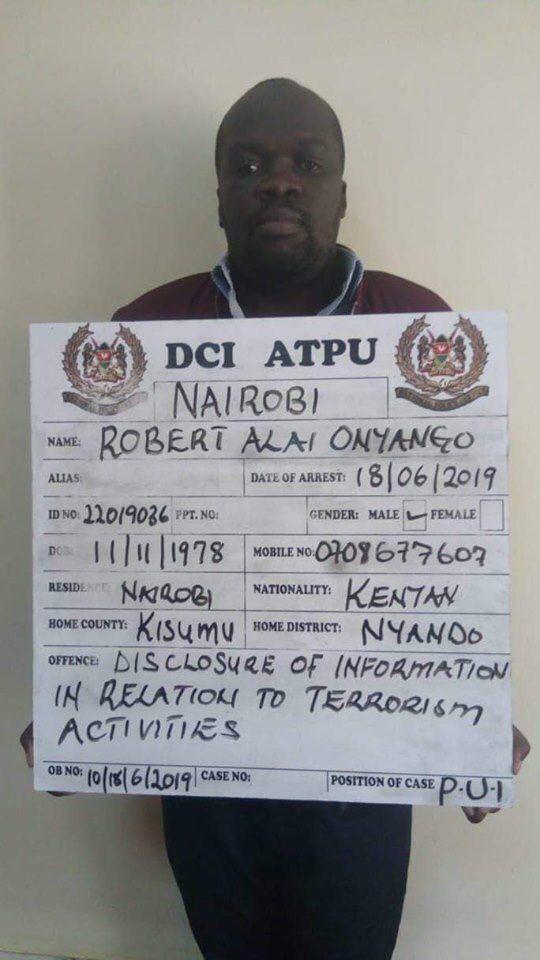 The ATPU did not, however, give much details on the charges facing the blogger who was arrested after sharing gruesome photos of policemen who were killed in Sunday’s terror attack in Wajir.

Mr Alai was warned by the National Cohesion and Integration Commission (NCIC) to pull the photos that seemed to be ‘glorifying’ terrorism activities in the country.

The National Police Service (NPS) condemned the publication of the photos by the blogger on his social media terming it lack of patriotism.

However, Mr Alai took issue with the government for neglecting the officers twitting, “I will continue to speak out for the poor police officers who are neglected and their allowances taken by “wakubwa.” We must give our men and women who die wearing uniform, respect, dignity and honor they deserve. We shouldn’t treat our cops like dogs. I am angry!!”

Mr Alai is currently out of touch with the world as his phone went off after the APTU pressed the charges against him.

The Sunday terror attack led to the death of eight soldiers after their vehicle ran over an Improvised Explosive Device (IED) planted by Al Shabaab militants.