Blac Chyna throws a chair at her mom Tokyo Toni

They have an infamously tumultuous mother-daughter relationship.

And things appear to have gone from bad to worse between Blac Chyna and her mom Tokyo Toni.

In the new The Real Blac Chyna trailer, the 31-year-old is seen throwing bottles and chairs at the 49-year-old, after accusing her of having bipolar disorder during a therapy session. 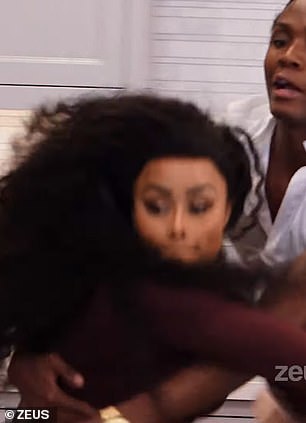 As they both scream, Tokyo yells, ‘I’m ready to get out of here’ while Chyna is lunging forward throwing drink bottles and a white chair as others in her home hold her back.

Their argument comes after another scene saw them both head to therapy. 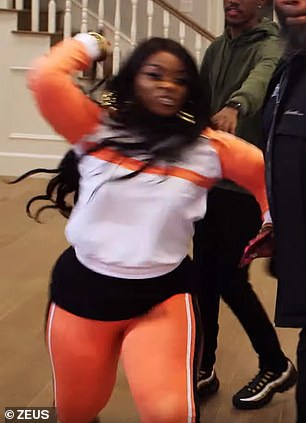 Working through their problems, Tokyo tearfully reveals she was once molested.

As the session continues, she tells Chyna, ‘I think you’re bipolar’.

Not taking things well, the former stripper replied: ‘I don’t care. I don’t care,’ before storming out of the session.

‘She’s evil to me,’ she’s heard saying about her mom in a separate scene.

On a lighter note, one point sees Chyna waltz down her stairs and take off her bathrobe to reveal her completely nvked body for all the guests.

The mom-of-two also gave a slight dis to both her former boyfriends and baby daddies, Tyga, and Rob Kardashian, calling them, ‘not the right people’.

Speaking to People about the series, Chyna said she was ‘excited’ for people to finally see the real her, AKA Angela White.

‘I am excited to set the record straight regarding my life on my own terms. Watching The Real Blac Chyna you will get to see my raw, real and edgy unfiltered life,’ she told the publication.

‘The World knows Blac Chyna but before anything, I’m Angela White! I am a black woman, a mother, a friend, a lover and a boss. I’m still figuring it out daily like everyone else. I hope to watch you’re inspired to not give in.’

And while she’s ready for people to see the real her, things sure have been real this weekend, with the reality star hitting back at ex Rob Kardashian after he demanded that the show not show their daughter Dream, two.

In a fiery Instagram post on Saturday, she accused Rob of ‘hypocrisy,’ in as much as Dream appears on the ‘stale and contrived’ Keeping Up With The Kardashians.

‘As Executive Producer of my show it is very unfortunate that Rob could not simply have an adult conversation with me “the mother of his child”, Dream Kardashian, appearing on my show “The Real Blac Chyna,”‘ she began the lengthy post.

‘Had Rob contacted me directly rather than through attorney Marty Singer, Rob would have learned about Dream participation in the show.’

Chyna defended: ‘First and foremost, I would never allow her 2-year-old daughter to be subjected to “long hours” on the set. Also, the very real and intense drama that happened between my mother and I, during the filming of “The Real Blac Chyna” took place outside of the presence of my daughter.’