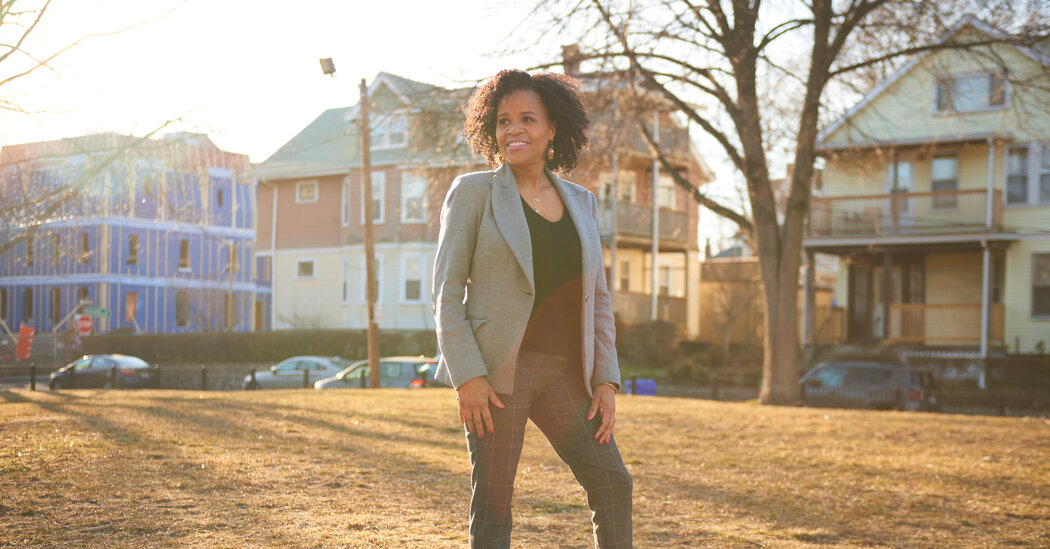 BOSTON — On a September morning in 1976, an 11-year-old Black girl climbed onto a yellow school bus, one of tens of thousands of children sent crisscrossing the city by court order and deposited in the insular neighborhoods of Boston in an effort to force them to integrate.

As her bus swung uphill into the heart of the Irish-American enclave of Charlestown, she could see police officers taking protective positions around the bus. After that, the mob: white teenagers and adults, shouting and throwing rocks, telling them to go back to Africa.

That girl, Kim Janey, became acting mayor of Boston on Monday, making her the first Black person to occupy the position, at a moment of uncommon opportunity for people of color in this city.

With the confirmation of her predecessor, Martin J. Walsh, as U.S. labor secretary, the 91-year succession of Irish-American and Italian-American mayors appears to be ending, creating an opening for communities long shut out of the city’s power politics.

It isn’t clear what role Ms. Janey, 55, will play in this moment. As the president of Boston’s City Council, she automatically takes the position for seven months before the November election, and she has not said whether she plans to run. But the five candidates already in the race are all people of color, and racial justice is certain to be a central theme of the campaign.

Nearly 50 years after court-ordered desegregation, Boston, the home of abolitionism, remains profoundly unequal. In 2015, the median net worth for white families in the city was nearly $250,000 compared with just $8 for Black families, according to a study from the Federal Reserve Bank of Boston.

Boston’s police force remains disproportionately white. And a recent review of city contracts found that during the first term of Mr. Walsh’s administration, Black-owned firms landed roughly half of 1 percent of the $2.1 billion in prime contracts.

None of this comes as a surprise to Bostonians who, like Ms. Janey, came of age in the 1970s — the “kids on the bus,” as one of them put it. Now in their 50s, they are a group without illusions about what it will take to close those gaps.

Denella J. Clark, 53, president of the Boston Arts Academy Foundation, carries a scar on her left leg from a broken bottle that was thrown at her by a white woman when she was a 9-year-old being bused into a South Boston elementary school.

“I still think we have those people that are throwing bottles, they’re just not doing it overtly,” she said. “When you see some of this change, it’s because people were forced to make those changes, just like in the court case” that led to busing in Boston.

Michael Curry, who was 7 when he was first bused into Charlestown, described a similar conclusion: In a city with a limited pool of jobs and contracts, “the people who have taken advantage of those things are being asked to share that pie.”

“Boston will not go without a fight,” he said.

‘Where Are They Now?’

Mr. Curry, now 52, recently realized something: More than four decades after he was bused to the Warren-Prescott elementary school, he has rarely returned to Charlestown.

He is middle-aged now, a father of three and a lawyer. But he can still close his eyes and replay the path of that bus as it slid past the Museum of Science, then turned right and crossed into Charlestown, where crowds were waiting, armed with rocks or bricks.

“It boggles my mind to this day,” he said. “How much hate and frustration and anger would you have to have to do that to children?”

He wonders sometimes about those white parents. “Where are they now?” he said. “Do they look back and say ‘I was there that day’?”

This month, Mr. Curry, a former president of Boston’s N.A.A.C.P. branch, reached out to his social media networks, asking friends for their own memories. The responses came back fast — and raw. “Absolutely no interest in recollecting memories from that era,” one said. “It was a nightmare.”

One person who has struggled to put that time behind her is Rachel Twymon, 59, whose family’s story was the subject of a Pulitzer Prize-winning 1985 book, “Common Ground,” which later became a television mini-series. Ms. Twymon still seethes at her mother, one of the book’s protagonists, for sending her to school in Charlestown in the name of racial justice.

“For adults to think their decision was going to change the world, that was crazy,” said Ms. Twymon, an occupational therapist who lives in New Bedford, Mass. “How dare you put children in harm’s way? How dare you? I have never been able to come to grips with that.”

Ms. Janey’s recollections of busing are tempered, by comparison.

“I had no idea what would be in store,” she said. “When I finally sat on the school bus and faced angry mobs of people, had rocks thrown at our bus, racial slurs hurled at us, I was not expecting that. And there’s nothing that can prepare you for that.”

She quickly added, though, that the environment changed as soon as she stepped inside Edwards Middle School, where her closest friend was Cathy, a white girl from an Irish-American family.

“The other thing that I would share, and I think this gets lost when we talk about this painful part of our history, is that inside that school building, I was a kid,” she said. “We were children. We cared about who we would play with, and who’s going to play jump rope, and who wants to play hopscotch.”

The city Ms. Janey will lead as mayor is radically changed, in part because of what happened after busing: The working-class, Irish-American neighborhoods that fiercely resisted integration began to wane under pressure from white flight and gentrification.

They had been poor neighborhoods. Patricia Kelly, 69, a Black teacher from New Jersey who was assigned to a Charlestown elementary school in 1974, recalled her shock at the deprivation she encountered there; once, she gingerly approached a boy’s mother about the stench of urine on his clothes and was told that they had no hot water.

After busing began, Boston’s public schools lost almost a third of their white students in 18 months, as white families enrolled their children in parochial schools or boycotted schools in protest.

For David Arbuckle, 58, who is white, it meant that most of his old friends were gone. He recalled walking to school through crowds of white residents who bellowed at him for violating the antibusing boycott, a daily gantlet that gave him stomachaches.

For decades, some of those childhood friends blamed desegregation for ruining their chances in life, Mr. Arbuckle said.

“They would tell you, ‘I didn’t get an education because Black people came to my school and took my seat,’” he said. The 1980s only deepened their grievances, he said; factory jobs were drying up, and court-ordered affirmative action policies, many complained, made it more difficult to be hired by the Police or Fire Departments.

“It almost feels like a lost generation, to some extent,” said Mr. Arbuckle, who now works in management for the commuter rail system in Boston. Returning to Charlestown as an adult, shuttling his sons to hockey practice, he sometimes wore a suit, straight from the office, and people from the neighborhood “would turn on me because I was a yuppie.”

He said it was hard to imagine members of the older generation softening their views, even as the city surrounding them became wealthier and more diverse.

Ms. Janey — whose ancestors escaped to Canada through the Underground Railroad and began settling in Boston in the second half of the 19th century — does not dwell on busing when she tells the story of her life, except to say that it was a setback.

Her parents withdrew her as soon as they could, sending her to the middle-class suburb of Reading through a voluntary busing program, starting in the eighth grade. She would go on to work as a community activist, serving at Massachusetts Advocates for Children for almost two decades before running for a seat on the Boston City Council in 2017.

She described her work in education, in a talk to students last year, as an extension of the civil rights movement that swept up her parents.

“The fight for quality education for Black families in this city dates to the beginning of this country,” she said. “It’s a hundred-year fight.”

The fury unleashed by busing reshaped Boston in many ways, including by setting back the ambitions of Black candidates. White anger made it difficult for them to build the multiracial coalitions that were necessary to win citywide office in Boston, said Jason Sokol, a historian and author of “All Eyes Are Upon Us: Race and Politics From Boston to Brooklyn.”

“You can’t overlook how powerful the legacy of the battles over school desegregation were,” he said. “The white resistance was so vicious that it didn’t seem like a political system a lot of African-Americans wanted to be part of. It was just very poisoned for a long time.”

Ms. Janey, who became mayor when Mr. Walsh stepped down on Monday, will officially take the oath of office on Wednesday, acutely conscious of her place in history.

The city will be watching to see if she makes a mark between now and November: The powers of an acting mayor in Boston are limited, and she may have difficulty making key appointments. Ms. Clark of the Boston Arts Academy Foundation, who serves on Ms. Janey’s transition committee, warned against expecting swift change in the city’s politics.

“I worry they’re going to block her at every instance,” she said. “We all know what Frederick Douglass said: ‘Power concedes nothing.’ This is Boston. This is a big boys’ game.”

Still, Thomas M. Menino, one of Ms. Janey’s predecessors, became acting mayor under similar circumstances, when the city’s mayor was appointed as a U.S. ambassador. Mr. Menino used the platform to build a powerful political base and was elected mayor four months later, becoming the city’s first Italian-American mayor. He went on to be re-elected four times, serving for more than 20 years.

Ms. Janey, by all appearances, would like to follow a similar path. Her swearing-in, she said last week, is a moment full of hope, a measure of how far Boston has come.