Traffic police department in Nyamira South subcounty in Nyamira county have been put on the spotlight for extortion, impunity and failure to enforce the traffic rules and laws in the area .

Incidentally, Interior cabinet secretary who is the boss of police Fred Matiang’i comes from the county where his juniors openly take bribes from motorists and Proboxes that Matiangi had banned from operating as matatus in the whole country. The police do it openly without fear or due regard to the CS.

The narrative doing the round in the county is that any traffic police officer posted to the area kneels down and prays to God reasons being that they have been deployed to the county of manna where they quickly make big fortunes through corruption from the matatu sector industry.

Investigations carried by the Weekly Citizen have also shockingly revealed that traffic police pay their bosses at the headquarters so that they can either be posted to Nyamira or Kisii county where within a short time those who have been posted there make money overnight due to high extortion from the matatu industry.

Following the rampant corruption which has engulfed the matatu sector being perpetuated by the traffic police officers, area matatu owners and operators who did not want to be quoted in fear of being victimised in their business petitioned Matiang’i and the Inspector General of Police Hillary Mutyambai to come to their rescue.

They told this writer that the traffic department in Nyamira South is not an enforcement force of the traffic rules and laws but go to the road to rob the matatu operators without violence but harassment and intimidation.

The operators demanded for the sacking of all traffic police officers working in Nyamira South, Manga and Nyamira North subcounties whom they termed and labeled as professional extortionists. 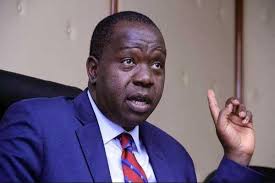 Members of the public and local leaders have also joined the matatu operators in condemning corruption syndicate in the matatu sector as some of them have openly witnessed the officers taking bribes with impunity from the matatu drivers and conductors.

The leaders have also put Matiang’i and Mutyambai on the spot for not taking any action against the Nyamira county traffic officers who were abetting corruption and bribery syndicate rings despite information being brought to their attention.

The leaders alluded that the National Intelligence Services officers in the county have evidence to justify that traffic officers are extorting money from boda boda riders and matatus operators with impunity and therefore it is high time action was taken on such errant officers.

Investigations established that since the current base commander officer Margaret Kariuki was posted to the area, corruption and extortion have become worse by the day.

According to reliable sources officers under Kariuki with or without her knowledge are using middlemen to collect bribes from the matatu operators and those who do not give in to Sh400 demand from every matatu per day, have their vehicles impounded, detained and trumped-up charges preferred against them before being arraigned in court.

In fear of this, Weekly Citizen has learnt that the operators have no choice but to dance to her tune by giving in to bribes demands since they do not want to have their business stall and subsequently be victimised.

It is claimed a police officer by the name Pricilla who is stationed at Kariuki’s office is the one mandated to collect bribes from the matatu owners and boda boda riders who land in her office.

“This base commander is wise and intelligent person because she doesn’t want to collect or receive the bribes. She uses her junior police officers and other matatu touts who are her confidants who at the end of the day or month, also receive or get a commission from the bribes collected,” a source claimed. Efforts to reach the traffic boss were fruitless as her phone was busy throughout.

Another police officer who is known to be notorious in taking bribes is a one Kimeli whom the operators say they want investigated because of his current lifestyle. They have also demanded for his from the area arguing that he has overstayed and outlived his usefulness.

It is also said that roadblocks mounted in the area were purely meant to extort money from the matatu operators and passengers who have not observed the traffic rules like fastening their safety belts.

The traffic police officers who are normally stationed at Moitunya, Sironga, Bondeni and Nyangoge take much of their time reading newspapers instead of enforcing the traffic rules.

The leaders who were led by Shem Ongera said that perpetuating corruption at Matiang’i’s backyard is a clear indication that the officers have no respect for Matiang’i.

He demanded that traffic police officers be reshuffled every month and majority of them to be investigated in a bid to establish the source of the money they are swimming in and yet they are not earning anything worth writing home about.

Members of the public who talked to Weekly Citizen said that matatu and Proboxes were carrying excess passengers to recover the money lost through bribes.

A matatu operator who talked to this writer on condition of anonymity said that in Nyamira and Kisii counties, corruption would not be addressed until Jesus comes for His second term.

Italy doctors warn of ‘bio bombs’ from patients sent to

CIC to Seek Investors’ Approval in Sale of 200 Acres

‘Likes will finish us’ Kamene and Kibe call out Pastor

Peter Ndegwa Takes Over as Safaricom CEO. Should Kenyans Worry?