John Nzenze: A tribute to the last king of African twist

For a perfect bulb onion, planting depth is crucial

How my farm makes tens of millions

The   Masinde Muliro University of Science and Technology management has suspended 19 students perceived to be the masterminds of the unrest that led to the closure of the institution on September 18, 2019.However the stuednts plan to move to court.

According to the memo seen by Weekly Citizen on the students’ notice board dated October 4 and signed by the acting registrar academic affairs, Prof. Thomas Sakwa, the students have been suspended indefinitely.

The Students’ Governing Council Chairman, Vincent Lumala, the Secretary General, Gerald Maina and the Treasurer, Amon Kiptarus are on the list. 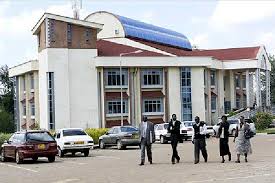 The varsity administration has started recalling the students and began with the first years who reported back y and were to pay Sh. 950 fine for the destruction of property during the strike.

The students said their other colleagues are to report on October 14.

The varsity staff camped at the gate and only those students who had cleared the first semester fees and signed a commitment to adhere to the institution’s rules and regulations were allowed in.

The strike had been prompted by the action of the university management to lock out students who had not cleared fees from sitting end of semester examinations.

A student leader who sought anonymity said the suspension is unfair as the victims had not been given a chance to be heard.

He accused the varsity authorities of sidelining the students’ representatives in the decision making process.

The acting Vice Chancellor, Prof. Asenath Sigot declined to comment on the matter.

John Nzenze: A tribute to the last king of African

For a perfect bulb onion, planting depth is crucial

How my farm makes tens of millions

Chantelle Petit opens up on the day Ephy Saint impregnated

DP Ruto holds meeting with Nandi elders as purge on

Throngs Marching in Australia and Europe Against Police Brutality